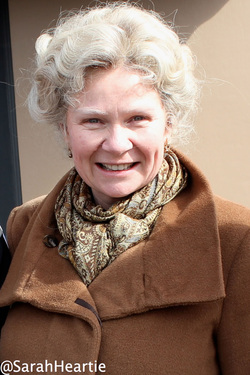 Beverley Elliott was born on December 31 in Listowel, Ontario and moved to Vancouver when she was in her early twenties. She is mother to a daughter named Sally.

On the west coast, she was able to combine her acting and singing careers.

She starred in the Canadian series Hope Island and was a regular on Bordertown and Mysterious Ways.

Beverley is a regular performer at the Just Singin' Round songwriters showcase as well as various other festivals, benefits, churches, and children's events.

Her song Are You Listening won first prize in British Columbia at the CHUM Radio's national competition.

Beverley was a finalist in the 1988 Bud Talent Contest singing at the National Country Music convention in Toronto.

Beverley has opened for such major acts as The Oakridge Boys, Jamie Warren, Thomas Wade and the Waywards, and has sung with Long John Baldry, Kathy MacDonald, Jim Byrnes and Lisa Brokop.

Some of her notable acting credits include playing the lead role as Canadian icon Lucille Starr in the theater sensation Back to You, The Life and Music of Lucille Starr as well as successful shows at Firehall Theatre,

Blyth Festival and touring with the hit Mom's The Word for six years.
Powered by