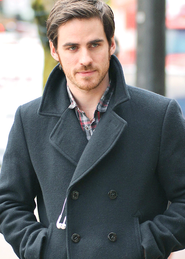 O'Donoghue was born and raised in Drogheda, County Louth, in a Roman Catholic family.

He initially attended Dundalk Grammar School, and then The Gaiety School of Acting in Dublin.

At age 16, O'Donoghue went to Paris for a month to learn French.


Career
Colin's early career was mainly split between theatre and television work in Ireland and the UK.

In 2009, O'Donoghue appeared as Duke Philip of Bavaria in an episode of season 3 of the Showtime historical-fiction series The Tudors.

He made his Hollywood film debut alongside Anthony Hopkins in the horror thriller film The Rite (2011).

O'Donoghue had made an audition video for The Rite in a friend's home studio in Drogheda and sent it to the United States. O'Donoghue also plays guitar and sings in a band called The Enemies, formed in 2003, in Ireland.

In 2012, O'Donoghue was cast as Captain Hook/Killian Jones in the second season of the hit ABC series Once Upon a Time.

His role started off as a supporting character, until it was announced that O'Donoghue would be billed as a series regular beginning with the second-half of the second season.

The Enemies
O'Donoghue was also a part of the five-piece band from the east coast of Ireland, The Enemies.

Formed in 2003 by O'Donoghue and close friend Ronan McQuillan, The Enemies released their self-titled debut EP on 7 March 2011, prior to their self-funded first album on track.

He played guitar and sang backing vocals on the band's first EP and debut album.

Though the band are unsigned, they were commissioned by General Motors to record tracks for their "Chevy route 66" online campaign.

The band have also worked on the music for Coca-Cola's "5BY20" project.

Their debut album Sounds Big on the Radio was to be released in March of 2013, now scheduled for summer/fall of 2013

Their song Sustain was featured on Direct TV's 3D surfing documentary series Gone Until December in the US in 2012 and they have also co-written and recorded the theme tune for 2012 animated European TV show Max Adventures.

O'Donoghue publicised The Enemies globally whilst promoting his film The Rite. The band performed at the wrap party in Budapest and at the European premiere of the film in 2011.

The Enemies attended South by Southwest festival in Austin, Texas in 2012, where they performed at an Award Ceremony, Thurman Mansion in Driftwood and other gigs.

In May 2013 O'Donoghue announced he was leaving the band due to the filming schedule of Once Upon a Time.
Powered by