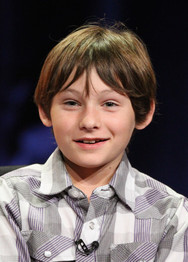 Gilmore was cast as Bobby Draper in 2009. He was the third actor to play the character, after Maxwell Huckabee and Aaron Hart, since 2007 when the character was originated.

In 2011, Gilmore left Mad Men and was cast in Once Upon a Time as Henry Mills, the "biological son [of Jennifer Morrison's character] and the only resident of Storybrooke who is not under the spell of the Evil Queen (Lana Parrilla)."

Series creators Adam Horowitz and Eddy Kitsis stated of the role, "One of our emotional centers was an 11-year-old boy who had to be precocious and vulnerable at the same time." Kitsis believed that Gilmore "naturally brought [these characteristics] out... We just knew he had to be our Henry!" Gilmore commented, "I relate to Henry because I'm 11 and also have a very good imagination. I enjoy making up and playing games in worlds with alternate realities myself."

Personal Life
He was born on May 30, 2000 in San Diego, California.. For two years, he attended John Robert Powers San Diego, a training school for actors, models, and singers.

According to Variety, Gilmore unintentionally began his acting career after running into talent representatives who were interested in his twin sister, Taylor. After many auditions, he acquired his first jobs through modeling t-shirts and acting in commercials.
Powered by