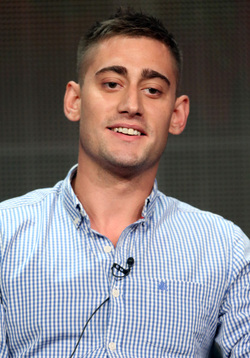 Early Life
Socha was born in Derby, Derbyshire, to Kathleen Lyons (nicknamed "Kath") and Robert Socha, on 13 December 1987. He is the older brother of actress Lauren Socha, star of the Channel 4 comedy-drama Misfits. Michael was brought up in Littleover - a suburb of Derby and attended St Benedict Catholic School. Socha was a rebellious pupil He often skipped school, but when forced to attend he tried to make it fun by doing the things he was most interested in.

At the age of 11 Michael unsuccessfully auditioned for the lead role in a school musical play. When Michael was 12, his mother read in a local newspaper about a play being cast by the Chellaston Youth Players. She asked her son and daughter if they wanted to try out for it, and both did. Michael's motivation for auditioning was his anger at being denied a role in the musical and his desire to prove his teachers wrong about his acting skills. He won the lead role of Bugsy Malone in the play. He acted in several plays for the group, but by his own admission did not take acting very seriously.

Through teachers at Michael's school the family learned about film director Ian Smith's Central Television Junior Workshop, a free actors' workshop for young people from the Nottingham area. He enrolled in the course when he was 14, but was almost refused admission as he had failed to learn the monologue for his audition and was put in the "reserve group". His second audition went the same way, but the programme relented and allowed him in after a time. Michael says the workshop had a strong impact on him, and he began working hard at acting. His first professional role came when he was cast in a small part in a short film. He was quickly cast in several small parts subsequently, and hired an agent.

Socha's father had a long history of alcohol abuse, and his parents separated. In 2004, Robert Socha died of an alcohol-related heart attack. According to Kath Socha (a residential social worker), the death of Michael's father made her son very independent. "Michael was walking the streets of London at 16 going to auditions. He had to because I was working. He'd go off with a map and Tube fare."

Michael Socha liked drama, English and history courses, however, and received his GCSEs in those three subjects. He credits his teacher, Mrs Urquhart-Hughes, as someone who watched over him, motivated him, and got him to do his homework after school.

His first job after leaving school was in a manufacturing factory. He disliked it and quit, and enrolled at Burton College, a further education school. He worked at two other factories after leaving school, as well as at a car wash. He also worked as a labourer for his uncle's bricklaying firm, mixing mortar for the bricklayers. But as he was constantly taking off work at the last moment to attend auditions he quit working full-time and dedicated himself to acting.

Career
Socha's breakthrough role came early in his acting career. In 2006, he was cast as the bully Harvey in Shane Meadows's skinhead subculture film, This Is England.

Despite his initial success, Socha was "penniless" and "waiting for work" for much of 2009 and early 2010, sitting at home and watching daytime television. His next big break came when Shane Meadows asked him to reprise the role of Harvey the bully for a four-part television series for Channel 4. The series, This Is England '86, follows the lives of the film's characters three years after the events originally depicted. It aired in September 2010. That same year, Socha appeared in an episode of the hit television comedy Married Single Other as well as the film Bonded by Blood. He also appeared in the This Is England Christmas special, and in a music video with American soul music singer Lauren Pritchard.

Socha appeared in BBC Three's hit supernatural series Being Human in 2011, receiving good critical notice as the innocent young werewolf Tom McNair. He almost did not appear on the show. He missed his audition after a taxicab hit him and fled the scene while he was helping a friend move furniture across a road in Normanton. Although only bruised, he missed his audition and had to plead for a second chance. He won the role of Tom, a young werewolf who has been brought up in the wild by his father and taught to hunt vampires. During his time on Being Human, Socha says he became good friends with Tovey and co-star Robson Green. Socha has admitted that he can get carried away while performing some of his more physically demanding scenes. On another occasion, acting out a werewolf transformation in a metal cage, he almost injured himself after his physical acting became too extreme. He has received at least seven minor injuries requiring medical treatment and reporting to authorities.

Socha was upgraded from a recurring role to the main cast for the fourth series of Being Human, after the previous main cast, including Russell Tovey, left the show. The fourth series started airing in February 2012. He also appeared in the music video to the Jake Bugg song "Seen It All" and in the music video to the Lauren Pritchard song "Stuck".

Socha's sister is Misfits actress Lauren Socha. He has a son named Elis Michael Socha, with his long-time girlfriend Faye.