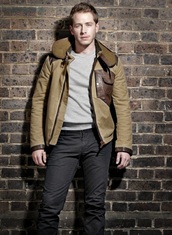 Dallas was born in Louisville, Kentucky. He graduated in 1997, at the age of 17, from New Albany High School in New Albany, Indiana,, where he studied theater under David Longest. Aged 16 he gained the Sarah Exley Scholarship, that fully funded his degree level studies at the Mountview Conservatoire for the Performing Arts in London, England.

Returning to the United States and based in Hollywood, he was cast in 2011 as Fandral in Thor after Irish actor Stuart Townsend withdrew from the role days before filming was to begin. As he was a virtual unknown actor when cast, there was some speculation that Dallas was selected because there simply was not enough time to find a bigger name replacement.

To prepare for the role, Dallas viewed Errol Flynn as an inspiration (Stan Lee, in 1965, created the character based on Flynn), and watched many of his films. He commented, "I tried to bring out that little bit of Flynn-ness in it. Flynn had a lot of that boyish charm and Fandral's got all that in him."

In 2011, he began starring on the ABC series Once Upon a Time as Prince Charming.[5] Dallas will not be reprising his role in the sequel to Thor due to his commitments in Once Upon a Time. Zachary Levi is replacing him in the film.

Personal Life
Dallas was married to actress Lara Pulver from 2007 until 2011. It was reported in April 2012 that he has been dating Once Upon a Time co-star Ginnifer Goodwin since fall 2011. They were engaged on October 8, 2013.
Powered by