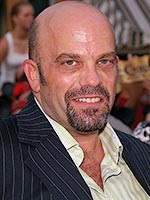 Coincidentally, in two of his appearances, ("The Nagus" and "United"), he played a character named Gral, one a Ferengi and the other a Tellarite.

In 1992 Lee appeared on the TV series Night Court. Arenberg also played the recurring role of bookie Mike Moffit in two episodes of Seinfeld. In "The Parking Space", he and George Costanza had a parking dispute, while in "The Susie" his thumbs were accidentally broken while trying to repair Jerry Seinfeld's car trunk.

He also guest starred in the fifth season of Friends in an episode titled "The One with the Inappropriate Sister".

He guest starred on an episode of Brotherly Love entitled "Motherly Love". He had a bit part as a bumbling Hold-up Man in RoboCop 3. Lee also played Dr. Moyer in the Scrubs episode "My Own American Girl".

He also starred as the dwarf Elwood Gutworthy in Dungeons and Dragons (2000), and the pirate Pintel in the Pirates of the Caribbean trilogy. He guest starred as "Hair Plugs" in Grounded For Life (2001).

A graduate of Santa Monica High in 1980,

He is currently starring as the regular character "Grumpy/Leroy" on the hit ABC television series "Once Upon a Time (TV series)".

As he confirmed when speaking at the Farpoint Star Trek Convention in Timonium, Maryland, Arenberg's character Pintel did not return in the fourth "Pirates" film.
Powered by